What are Windlocked Roller Doors, and Why are they being specified

Until recently Windlocked Roller Doors were only ever talked about in very large Commercial Doors and Roller Doors sent to the Pacific Islands.

In 2019 there was an amendment to the standard AS1170 that meant all new doors need to have the design for wind considered.  This does not mean you HAVE to windlock the door.

To prevent this occurring  roller doors can be windlocked which is a clip that holds the curtain in the guide and resists blow in or blow out.  The windlock guide must be fitted during manufacture and cannot be retro fitted.

The manufacturers all have their own version of the Windlock system, but they look something like this. 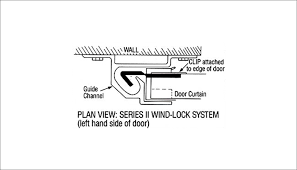 Under load the clips on the curtain hook the lugs on the guide.  Forced entry is often achieved by applying a similar load effect, so adding windlock doors can also greatly improve the physical security of the building. Windsor Doors do not have wind rated roller doors, only thier shutter doors are rated.

Windsor Series 1 and Series 2 doors do not meet the current NZS wind standards and should not be used in exposed situations.

This generally applies throughout Taranaki, Matamata/Piako, Wellington and the South Island.

Garador Series 1 are not wind rated as standard doors so we list them as windlocked by default, you can choose to down grade to 50mm guides or standard guides if your site is not exposed.